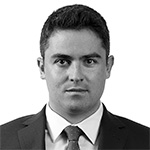 Geoff Mens practises in all areas of commercial and civil litigation. Mr. Mens joined our Toronto office as a summer student in 2015 and returned to complete his articles with in 2016-2017. During his articles, he completed a secondment at Toronto Hydro Corporation.

While in law school, Mr. Mens was actively involved in Western University's mooting program and was selected to represent the school as an oral advocate in the Harold G. Fox Moot. Mr. Mens also volunteered with the university's Community Legal Services clinic providing legal aid services to local residents.