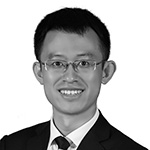 Lianying Wang is a corporate lawyer based in Beijing. He focuses on foreign direct investment, joint ventures, mergers and acquisitions and other general corporate and commercial matters in and involving China.

Lianying Wang received his LLB from Jilin University in 2011, and has two LL.M. degrees from China University of Political Science and Law and Ludwig-Maximilians-Universität München respectively. Lianying Wang passed China bar exam in 2011 and speaks Chinese, English and German.