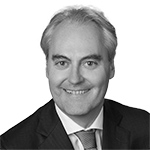 Gerd Stuhlmacher is a regulatory lawyer based in Munich and a member of the German energy team.

He is highly regarded for his knowledge in all aspects of German and European energy law, including international trading of electricity, gas and LNG. Besides the structuring of all types of commodity transactions, he focuses on compliance with regulatory requirements of the energy trading market. Gerd also has first-hand experience in price adjustment disputes, corporate reorganizations and M&A transactions in the energy sector.

Gerd joined the firm as a partner in 2017. Before joining the practice, he had been the Director of Legal and Compliance for E.ON Global Commodities SE since 2008, where he was responsible for providing legal support to the group's German and global trading and wholesale activities for over ten years. He started his career with E.ON in Munich in 1999.

He represented E.ON in the Legal Committee of BDEW, the German Energy Industry Association, as well as in Eurogas and EFET, both industry associations for European energy companies. He initiated multiple initiatives for the creation of new trading contracts based on the EFET-Standard and overcoming regulatory obstacles in cross-border trading.

Gerd completed his qualification as a German lawyer in 1997. He holds a law degree from Freie Universität Berlin, where he focused on competition, antitrust and corporate law.

Gerd is a German native speaker, is fluent in English and has a good command of the Spanish language.

Blockchain and the energy sector