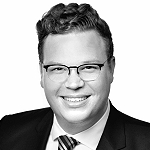 Adriaan Louw is corporate lawyer based in Frankfurt.

Adriaan completed his legal traineeship in our Johannesburg office and has been involved in every aspect of the M&A process, from the provision of structuring advice, conducting and managing due diligence investigations, advising on deal structuring, to contract negotiation and drafting.

In addition, Adriaan applies his deal experience to advise on warranty and indemnity insurance (W&I) policies; typically, in relation to large scale multi-jurisdictional transactions. Adriaan also spent six months at AIG's Frankfurt office as a secondee underwriter where he worked as part of the M&A team dealing with W&I insurance.

Adriaan graduated from Stellenbosch University with a Bachelor of Commerce (law, financial accounting & tax) and a Bachelor of Laws in 2014 and 2016 respectively. Whilst completing both his degrees in South Africa, Adriaan spent several months abroad, completing an exchange semester at Bucerius Law School in Hamburg, as well as a short course in human rights law at Humboldt University in Berlin.