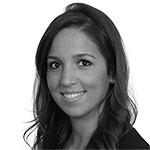 Faiza Saiki is a corporate lawyer and a MENA team member based in Paris.

She advises French and international clients on their mergers and acquisitions deals, partnership agreements, tender offer processes, international joint ventures as well as on general corporate matters with a particular emphasis on Middle East, North Africa and French-speaking Africa.

Prior to joining us in 2013, Faiza worked as a trainee lawyer in the Africa department of a major French industrial group in 2012.

Faiza is graduated in Business law from the University of Paris II-Panthéon Assas.