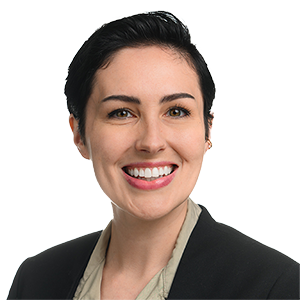 Justine Smith joined the Toronto office as a summer student in 2016. She returned to complete her articles in 2017, which included a secondment with Toronto Hydro. She now practises as an associate in the litigation group in all areas of commercial and civil litigation.

Throughout law school, Justine maintained a place on the dean's list as one of the top 10 students in her class. She volunteered with Pro Bono Students Canada and received prizes for her work with the Manitoba Law Journal, trademarks and patents course, and constitutional law course. During her third year of law school, Justine had the opportunity to clerk at the Manitoba Court of Appeal for one semester and also competed in The Harold G. Fox Moot where she received an honorable mention for Best Oral Advocate.