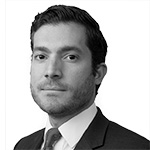 Santiago Ross is a projects lawyer based in London. He focuses on the construction, operational and regulatory aspects of energy and infrastructure projects.

Santiago joined the Caracas office in 2010 and transferred to London in January 2015.

He is fluent in English and Spanish and has advised on major transactions in Europe, Middle East, Africa and Latin America in both languages.