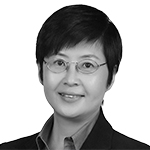 Barbara Li is a corporate and TMT lawyer based in the Beijing office. Dual-qualified in the PRC and England and Wales, Barbara focuses her practice on China-related corporate and commercial matters, M&A, joint ventures and cross-border counselling.

She has a wealth of experience in the TMT industry and has over 17 years' experience of advising international companies on doing business in China. Previously she was in-house legal counsel for Ericsson in Beijing, China.

Barbara leads the firm's award-winning China TMT and FinTech practice. She is described as having "extensive experience in complex TMT regulatory issues" by Legal 500 Asia Pacific 2019, in which she is also recommended as a leading individual for M&A transactions in the Chinese market.

She is the vice-chair of the Cybersecurity Sub-working Group of the EU Chamber of Commerce and frequently writes and speaks at professional and industrial conferences.

Barbara graduated from the China University of Law and Political Science with an LL.B. (1989) and an LL.M. (1992), followed by an LL.M from King's College, London University (1997). She completed the Common Practice Examination course in 1999 and the Legal Practice Course in 2000.

Barbara is a native Chinese speaker and fluent in English.

Includes advising on the following:

Personal data protection in the time of coronavirus (Covid-19)