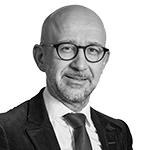 Godefroy Le Mintier is a corporate lawyer based in Casablanca and Paris.

Godefroy practices mainly in the fields of mergers and acquisitions, privatisations, tender offer processes and international joint ventures. He is part of the Middle East and North Africa (MENA) team.

Godefroy graduated from the Ecole des Hautes Etudes Commerciales (HEC) and masters in law from the University of Paris XI (Sceaux). He joined the practice in 1999 after having spent more than a year in Morocco (Casablanca) as chargé de mission junior in Proparco, the private sector arm of Agence Française de Développement, the French state-owned public aid and development corporation.

Godefroy assisted in the creation of our French MENA practice and has been active in Africa (where he also lived) for almost ten years. He advised clients on corporate transactions, privatisations, tender offers in Maghreb and French-speaking Africa. He advised a number of financial institutions like Société Générale, BNP Paribas and Attijariwafa bank (the first banking group in Morocco), in their bids for or their acquisitions of various banks in Maghreb and Africa (Egypt, Libya, Senegal, Mali, Mauritania, Tunisia and Togo). In West and Central Africa, he recently advised Optorg (ONA-SNI Group) in its merger with the Belgian group, SDA/Demimpex which involved about 15 jurisdictions in Africa.

Godefroy was seconded to the London office in 2000 and to a client in Abu Dhabi in 2011.