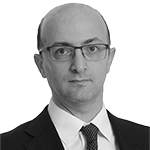 Salvatore Iannitti is a corporate and regulatory lawyer based in Milan. He focuses on insurance, re-insurance and has vast experience of advising on contracts, regulatory issues, compliance and intermediation.

Prior to joining the firm, Salvatore interned at the Italian Treasury Department, researching and writing reports on issues including: the government budget; the effects of the introduction of the Euro on public administration; and the contractual activity of public administration. Salvatore also interned at the Centre for International Environmental Law in Washington, DC, where he researched and wrote about issues pertaining to the General Agreement on Tariffs and Trade (GATT) trans-boundary pollution agreements, and the World Bank and its jurisdictional immunity. He participated in a series of seminars in Arlington, Virginia organised by consulting enterprise Advanced International on matters relating to the political, financial and economic system of the US, and US intellectual property legislation.

Salvatore has completed numerous secondments since joining us, including placements at Marsh and AIG's Milan offices.

Step forward on claims made clauses