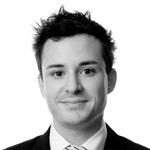 Ross has extensive experience running commercial and regulatory disputes and business restructuring matters in the telecommunications industry, both in South Africa and in Nigeria.

During 2017 and 2018, Ross took a 2-year hiatus from practice during which time he acted as the general counsel at a technology start-up based in the United Kingdom and Switzerland. In particular, he advised on all elements of data privacy, including the applicability and implementation of the GDPR, as well as on issues relating to IP protection. He was also involved in negotiating and drafting software as a service agreements as well as software licensing agreements.

Ross also advises on the protection of personal data, and has been involved in numerous responses to cyber attacks and breaches.

Ross obtained his Bachelor of Business Science and Bachelor of Laws degrees from the University of Cape Town. Ross completed his articles at another large global law firm where he was retained as an associate. Ross, joined the firm in 2011 and was promoted to director in the corporate and commercial litigation team in 2015. During 2017 and 2018 Ross acted as general counsel for a technology start-up based in the UK and Switzerland. Ross re-joined the firm as a director in March 2019.

B Bus Sci (Law and Economics) and LLB degrees from the University of Cape Town.

Certificate in Advanced Company Law from the University of the Witwatersrand