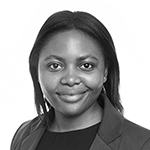 Juliana is an associate in the Competition team based in the Johannesburg office.

Juliana was in the Competition team for a year as a candidate attorney and has been in the team as an associate since February 2021.  She has been involved in various aspects of competition law, including merger notifications and proceedings, complaint proceedings and compliance training.

She has assisted in merger filings, including multi-jurisdictional mergers in South Africa and across Africa, as well as cartel and prohibited practice investigations. This experience relates to various sectors including the mining, transportation, automotive, FMCG, healthcare and other sectors.