As the Energy Charter Treaty nears its 20-year anniversary, we examine how disputes are handled under the treaty and look at what the next 20 years might hold.

In 1991, at the end of the Cold War, energy-poor states in western Europe and former Soviet states in need of major investment for their vast energy resources seized an opportunity for beneficial cooperation. The European Energy Charter declaration, signed that year, outlined principles for cross-border cooperation in the energy industry, focusing on security of energy supply for the EU. The resulting Energy Charter Treaty was signed in Lisbon in December 1994 (almost 20 years ago) and came into force in April 1998. Today, the ECT has 51 states as signatories, with 4 countries yet to ratify. Of these, 14 are former Soviet states. Many others have observer status, including the US, Canada and China.

Arbitration under the ECT

An investor can bring claims against a contracting party to the ECT (i.e. the host state) for breach of an obligation involving investment protection (article 26, ECT). Disputes should ‘if possible, be settled amicably’ and a three-month consultation period be observed (article 26(1)). The consequences of failing to observe this are unclear. While some cases have held that non-observance is not a bar to arbitration, there is no principle which stipulates that an investor may ignore amicable settlement with impunity.

Once the cooling-off period has come to an end, an investor can choose between a domestic court of the contracting party, ICSID (provided that both host state and home state of the investor are parties to the ICSID Convention) or international arbitration under the UNCITRAL or Stockholm Chamber of Commerce Rules. The contracting party must ‘give its unconditional consent to the submission of a dispute to international arbitration or conciliation’ (article 26(3)(a)).

The ECT also includes a ‘fork in the road’ provision, requiring an investor to choose, from the outset, whether to pursue domestic legal proceedings or international arbitration – but not both. Contracting parties listed in Annex ID of the ECT may refuse to consent to the submission of a dispute to international arbitration where the investor has previously submitted the dispute to another dispute resolution forum (article 26(3)).

Contracting parties have the right to deny the investor access to the ECT’s investment provisions where the claimant has no substantial business activities in the country where it is organised and is owned or controlled by nationals of a third state (article 17).

Some bilateral investment treaty (BIT) jurisprudence has allowed states (where there are no contrary provisions in the BIT) to rely on denial of benefits clauses after the dispute has arisen or the request for arbitration been filed. Tribunals in disputes under the ECT, however, have held that, for the ‘denial of access’ option to be effective, a contracting party must invoke the right to deny benefits under article 17 before the investor claims the benefit, not retrospectively.

While the term ‘investment’ in the ECT is still open to interpretation, given the relatively small number of reported cases, it is generally regarded as a fairly broad definition. For example, even a debt under an agreement for supply of equipment for a nuclear plant assigned to the claimant seems to have satisfied the test. The ECT may therefore be a more attractive option for parties who may struggle to show a qualifying ‘investment’ under one of the narrower BITs.

In the Yukos proceedings – discussed below, – Russia argued that ‘applicable rules and principles of international law bearing upon the exercise of treaty interpretation… require the Tribunal to go beyond the facts relating to Claimant’s formal incorporation in order to determine whether Claimant qualifies as an Investor for purposes of Article 1(7)) of the ECT’. Russia also argued that the investors ‘(did) not qualify as an ‘Investor’ for the purposes of Article 1(7) of the ECT... in particular... since it is a shell company beneficially owned and controlled by Russian nationals and, as such, by nationals of the host State’.

The tribunal disagreed, and instead found that article 1(7) ‘contains no requirement other than that the claimant company be duly organised in accordance with the law applicable in a Contracting Party’, and went on to say that ‘… in order to qualify as a protected Investor under Article 1(7) of the ECT, a company is merely required to be organised under the laws of a Contracting Party’.

In another jurisdiction award in a separate case, the tribunal held that, for the purposes of article 1(7) of the ECT, ‘it is... irrelevant who owns or controls the Claimant at any material time’.

Potential ECT claimants should, however, check whether the host state has already opted for the ‘denial of access’ option under article 17 referred to above.

Using just the data publicly available (as reported on the Energy Charter website), there is a clear preference for institutional arbitration in choice of dispute resolution mechanism.

While the first few ECT cases were brought predominantly against eastern bloc countries, recently there has been an increase in the number of cases against western European states. 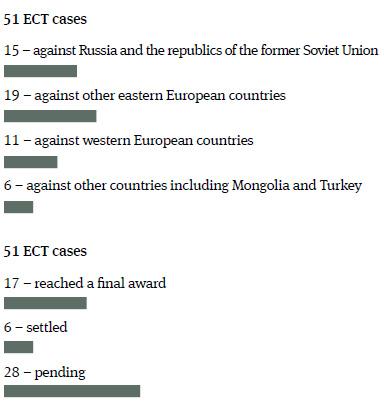 Regardless of choice of procedure, an award under the ECT is ‘binding and final’.

The United States is not party to the ECT but does hold observer status and was heavily involved in its development.

In 2005, the shareholders of Yukos Oil Corporation initiated ECT UNCITRAL arbitration proceedings against Russia. Russia signed the ECT in 1994 but did not ratify it, and argued in the arbitrations that it was not bound by the ECT. However article 45 of the ECT required Russia to apply the ECT ‘provisionally’.

On 20 August 2009, Russia gave notice that it wished to cease to be a provisional member of the ECT, effective on 19 October 2009 (after a mandatory 60-day notice period). Russia is, however, still under an obligation (until 19 October 2029) to afford the investment protection under Part III of the ECT to investments made before 19 October 2009 for 20 years.

The ECT is a comparatively young treaty and the number of investor-state arbitrations is growing. Sixteen cases were filed in the last year alone (of a total of 51 cases reported by the Energy Charter Secretariat). This figure is still low compared with disputes brought under BIT provisions, but shows an upward trend.

In an effort to improve transparency, the Energy Charter Secretariat is considering publishing all decisions made by the Energy Charter Conference – the ECT’s governing body, composed of representatives from all signatory states – as well as publishing a consolidated text of the ECT which includes summaries of all known cases. The Secretariat is also preparing a commentary on the ECT.

The revised UNCITRAL Rules, which came into force on 1 April 2014, will apply to all future ECT disputes.

While Russia’s exit before ratification means that the ECT’s original purpose of creating bonds between Europe and post- Soviet states is in some doubt, the Energy Charter Secretariat recently remarked that it was working closely with Russia and Ukraine to avoid an energy crisis as a result of the tensions in Crimea. The ECT is also extending its reach into Asia: Afghanistan ratified the treaty in 2013; and Pakistan (an observer since 2005) has indicated its intention to ratify.

There has been a trend for some states to withdraw from arbitration under investment treaties –Ecuador, Venezuela and Bolivia have all recently withdrawn from ICSID – and some commentators predict that states will increasingly seek other legal frameworks for the resolution of energy disputes. The WTO General Agreement on Tariffs and Trade (for transit disputes) is one such example. However, the growth of new economies – with investment no longer flowing simply from west to east – and an ever-increasing need for global governance, in particular in the energy sector, suggests the ECT may yet have a promising future.

Deborah Ruff is a partner and Julia Belcher and Charles Golsong are associates in the London office of Norton Rose Fulbright.