In May 2016, India enacted the Insolvency and Bankruptcy Code ("IBC"), which completely overhauled the bankruptcy laws in India. The IBC aimed at synthesizing and improving India's restructuring laws in order to provide restructuring outcomes with greater certainty and efficiency thereby incentivizing further investment into the country. Prior to the IBC, India's insolvency resolution process involved a range of legislation that had been passed over several decades. The applicable insolvency laws included the Sick Industrial Companies Act (1985), the Securitisation and Reconstruction of Financial Assets and Enforcement of Security Interest Act (2002), the Recovery of Debt Due to Banks and Financial Institutions Act (1993), and the Companies Act (2013). This collection of laws created a fragmented and, at times, contradictory bankruptcy regime in India. As a result, decisions were often appealed, stayed, or overturned, resulting in long delays in insolvency cases, with the average resolution taking four and a half years.

The IBC sought to remedy the situation by consolidating the insolvency laws under one statutory scheme. Insolvencies pertaining to stock corporations, partnerships, limited liability companies, and individuals all fall within the bounds of the IBC. Much like the US bankruptcy model, insolvency proceedings for a debtor under the IBC begin with a resolution process that is geared towards reaching a plan of reorganization. If the resolution process fails, the debtor then is subject to liquidation proceedings to settle the outstanding claims.

Despite the broad reach of the IBC to commercial enterprises, one notable debtor type remained excluded: non-bank financial firms. With many so-called large "shadow banks" in a state of financial turmoil in recent years, the Indian government took the initiative in 2019 to expand the IBC to apply to these financial businesses and to otherwise amend the IBC to bolster the rehabilitative process.

The shadow banking system in India is comprised of non-bank financial intermediaries that provide services similar to traditional commercial banks. Shadow banks, however, are not subject to the same regulations as traditional banks and often lend to higher risk borrowers. Shadow banks, therefore, are particularly susceptible to downturns in the economy.

Following aggressive lending over the past few years, the first sign of crisis for shadow banks appeared when Infrastructure Leasing & Financial Services Limited ("IL&FS"), India's leading infrastructure non-bank finance company, defaulted in September 2018. The country's Central Government responded by asking the National Company Law Tribunal ("NCLT") to remove and replace IL&FS's Board of Directors. On October 1, 2018, the NCLT suspended the existing board and appointed six new board members. Although IL&FS became insolvent more than a year ago, it has yet to enter a formal bankruptcy process. Instead, the government has been working to sell off the company's assets in parts.

Even with the damage control efforts implemented by India's government, the consequences of IL&FS's collapse have rippled through the Indian economy, causing distress in the construction industry. By the end of September 2018, over 200 infrastructure developers in India had initiated proceedings in bankruptcy court. Since then, that number has more than doubled. The rise in developer insolvencies has been largely attributed to their inability to receive adequate funding due to the pull back in lending by commercial banks and distress in the shadow bank sector. In that regard, credit disbursals by shadow banks dropped by nearly one third in 2019, following aggressive growth in the past three years.

With commercial banks in India already struggling with heightened levels of non-performing assets, there has been no indication that the lending void left by shadow banks will be filled anytime soon. The consequences of IL&FS's insolvency have been so severe that many have referred to it as India's "Lehman moment." While others have been quick to argue that the impact of IL&FS has been far less systemic than Lehman, with no major bank failures or the onset of a recession, troubles at other major shadow banks are likely to accelerate the lending slowdown that has continued since late 2018.

In hopes of facilitating better outcomes for distressed shadow banks, and thereby bolstering liquidity for developers and other enterprises, India amended its bankruptcy and insolvency rules to bring these non-banking finance companies – shadow banks – within the scope of the IBC and amended the IBC generally to foster restructuring efforts.

In November 2019, the Indian Government announced new rules involving section 227 of the IBC. Section 227 grants India's federal government the power to notify financial service providers of their insolvency and liquidation proceedings, which may now be conducted under the IBC. These rules provide that the Government may refer cases of shadow banks with assets of at least five billion rupees to insolvency court under the IBC.

The new rules and amendments for shadow banks came too late for IL&FS. The Government instead has continued its out of court piece-meal liquidation of IL&FS.

DHFL will be the first financial institution to test the effectiveness of the IBC with respect to a shadow bank restructuring. Moreover, with IL&FS still being handled out of court, DHFL is the largest corporate insolvency resolution process ever in India since the IBC went into effect in December 2016.

The new rules bringing shadow banks under the umbrella of the IBC are not the only newly enacted bankruptcy laws in India. On August 5, 2019, the IBC (Amendment) Act, 2019, received presidential approval. The Act made many key changes and additions to the IBC. The most notable adjustments included (a) increasing the timeline for the corporate insolvency resolution process from 270 days to 330 days, (b) mandating that operational and dissenting creditors not receive less in a resolution than they would in a liquidation (akin to the best interests of creditors rule in the US and other jurisdictions), and (c) making the resolution plan binding on all stakeholders. These changes include aspects designed to both protect creditors and enable restructurings to succeed.

Whether and how the new rules will work to preserve DHFL and other distressed shadow banks remains an open question that will have repercussions throughout the Indian economy. Thus far, results for corporate businesses generally under the IBC have been anything but consistent. Of the approximately 2,500 cases that have been admitted into the corporate insolvency resolution process from 2016 through September 2019, almost 1,500 are ongoing. Of the cases that have closed, only 15% have done so by resolution, i.e. a restructuring plan. The majority of cases have closed by liquidation, while others were settled or withdrawn.

Though the adjustments to the IBC may be too recent to measure their relative success, India appears set on facilitating the revival of corporate debtors by encouraging a resolution and preventing lengthy delays. When considered with the new rules passed in August and November 2019, indications are that India is seeking to move its bankruptcy laws towards improved predictability and effectiveness, with the hopes of insuring continued lending and investment and the fair resolution of distressed companies.

The jury is still out, but stay tuned for further developments regarding how both commercial enterprises and shadow banks fare under this new insolvency regime in India.

Bandar Al-Saif is an associate in our New York office in the firm's financial restructuring and insolvency group. 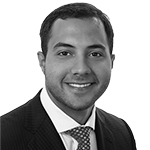