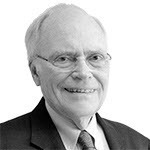 Since his retirement in 2000 Gene has provided pro bono legal assistance through Mercy Center in the Bronx where his practice covers a broad range of issues including immigration and family law. He has continued his international interest by serving in 2000-2001 as head of the Budapest Office of the International Center for not-for-Profit Law. For several months in 2007 he assisted Public Interest Law Institute to establish a pro bono clearing house in Moscow. In 2011 he became coordinator of the Arms Trade Treaty Legal Response Network, a group of 70 lawyers from around the world providing real time legal advice to UN delegates negotiating an arms trade treaty which was adopted by the UN General Assembly on April 2, 2013.