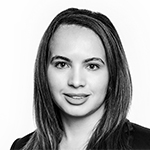 Ildiko is a corporate, mergers and acquisitions lawyer based in Johannesburg.

Ildiko joined the banking and finance team as an associate designate after having spent time seconded to our office in Dar es Salaam, Tanzania in 2016 to early 2017. On her secondment Ildiko gained invaluable experience in project finance and general commercial work in the emerging markets. Thereafter, Ildiko moved to our corporate, mergers and acquisitions team as an associate. Ildiko focuses on mergers & acquisitions across various sectors and also advises on company law and corporate governance.

Ildiko joined us in 2015 to serve her articles of clerkship and was appointed as an associate in 2017 upon her return from her secondment in Dar es Salaam, Tanzania.

Bachelor of Commerce degree, University of the Witwatersrand, 2012

Buying or selling a business: Types of purchase price mechanisms

Law Society of the Northern Provinces.