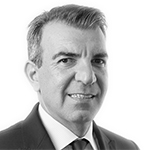 He has acted for Greek and international companies, both private and state-owned, as well as financial institutions which invest or lend to companies operating in Greece.

He studied law at the University of Athens and obtained a master's degree (LLM) from the Free University (Vrije Universiteit) of Brussels. Dimitris has been a qualified lawyer since 1995, joined our office in 2007 and became a partner in 2010.

Before joining our office in Athens, Dimitris worked for the European Parliament and the European Commission, as well as for a leading Greek legal practice in Athens. He is a member of the Athens Bar Association, the Institute of Energy for South East Europe (IENE) and the Greek Energy Lawyers Association.

Dimitris is consistently listed as one of the leading energy lawyers in Greece by both Chambers and Legal 500.

Legal 500 EMEA 2019 states "practice head Dimitris Assimakis is acknowledged in the market as one of the best for energy project finance." According to Chambers Europe 2019, "Dimitris Assimakis enjoys significant market acclaim. He has market-leading expertise in financing transactions and M&A deals in the energy sector, with a particular focus on wind farm projects."

Securing sustainable energy independence for the Greek islands: the role of storage

Shifting to auctions for renewable energy capacity in Greece