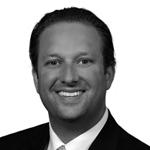 He has represented issuers involved in the energy sector, including propane distribution, electricity generation, renewable energy and oil and gas exploration and exploitation, both domestically and internationally.

Clients for whom Mr. Pettigrew has acted include: