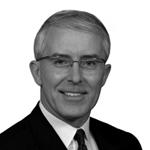 Roger Watkiss practises corporate and commercial law with an emphasis on technology and intellectual property matters. He advises on acquisitions and divestitures of businesses with a significant technology component, including those in the energy, ICT and mining industries. He also advises buyers and sellers of services and technology on licensing, outsourcing, construction and strategic alliance matters.

Mr. Watkiss has a long and distinguished career as both in-house counsel and as a corporate development executive in the telecom and real estate development industries. Immediately prior to joining our Toronto office, Mr. Watkiss spent 15 years with TELUS Corporation (Western Canada’s largest telecom company, and the second largest in Canada, with over C$7 billion in annual revenues) in a variety of progressively senior roles, including vice-president, strategy & business development. He served as part of the core team that “privatized” Alberta Government Telephones to form TELUS in 1990 (first tranche of C$875 million) and also the team that successfully merged TELUS and BC Telecom in 2000.