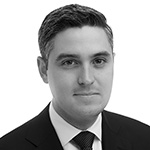 Scott recently completed a nine-month secondment with the Office of Mergers & Acquisitions at the Ontario Securities Commission. In this role, he was involved in the oversight of M&A transactions and other matters involving public companies and participated in a variety of policy initiatives and other special projects.

Scott joined our Toronto office as a summer student in 2017 and returned as an articling student in 2018. During his articles, Scott was seconded to the legal department of the Royal Bank of Canada.

Before beginning his legal career, Scott held various positions in the legal, compliance and regulations department of a leading payment network in Canada.