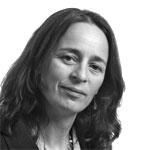 Milly Ayliffe is a legal consultant based in London focusing entirely on rail financing transactions.

Milly has been involved with rail since before the privatisation of British Rail, when she was seconded to Hambros Bank and where she acted on behalf of the UK Government in setting up the rolling stock companies (ROSCOs). Since then she has acted predominantly for HSBC Rail and, in circumstances where their interests are aligned, all three ROSCOs on a variety of transactions. She has also recently been instructed by National Express to act on behalf of a variety of its franchisees.