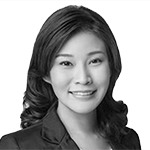 Adriana Uson is a dispute resolution lawyer based in Singapore. Her practice involves advising and representing clients in cross-border disputes and international arbitration.

Prior to joining the firm, Adriana was counsel at the Singapore International Arbitration Centre (SIAC) where she administered over 200 cases under various versions of the SIAC Rules and UNCITRAL Arbitration Rules, including: cases involving investor-state disputes; SIAC Emergency Arbitrator procedure; SIAC-SIMC Arb-Med-Arb Protocol; and applications for consolidation and joinder of third parties.

Adriana has recently been selected by SIAC as one of its new young committee members. She was previously a member of the drafting committees for the SIAC Rules 2016, SIAC Investment Arbitration Rules 2017 and SIAC Practice Notes.

Adriana previously worked as a litigation and dispute resolution associate at a top-tier law firm in the Philippines.