Despite spending most of their life as underwater nymphs, dragonflies rank among the best flying objects on the planet within hours of emerging from the water and unfolding their wings.

How do dragonflies fly? And how might the secrets hidden in dragonfly wings help us?

Dragonflies generate forces of up to 9 g in turns, matching the best fighter jets, while also being able to hover, and move laterally and backwards like a helicopter. They can reach top speeds of 35 miles per hour, more than three times the speed of the fastest aircraft in terms of body lengths travelled per second. Champions of endurance and efficiency, they are known to cross oceans by riding prevailing winds at altitudes of over 1000 metres.

Dragonflies owe much of their prowess to the architecture and composition of their two pairs of tandem wings. These wings are strong in order to withstand the high forces generated during powered flight. They are lightweight in order to minimize the size of the wing muscles and overall body weight. Being stiff allows the wings to drive large volumes of air; being flexible enables them to avoid stress damage from beating rapidly at nearly 30 times a second.

Dragonfly wing membranes—averaging less than one tenth of a human hair in thickness—are reinforced by a network of large veins running in the longitudinal direction of the wing, connected to smaller veins running in the perpendicular direction. These veins are made of a composite material, with microfibrils of chitin—a polymer of modified sugars responsible for the hard exo-skeleton of insects and crustaceans—embedded in a protein matrix. The outer layers of the veins are stiff because they have a high chitin content: this makes them resistant to bending under load. The inner layers of the hollow veins are softer and have more resilin, a protein that acts like a molecular spring to reversibly change its three-dimensional structure in response to mechanical loads. The hard shell—soft core structure of the veins improves load-carrying capacity and damps unwanted vibrations. 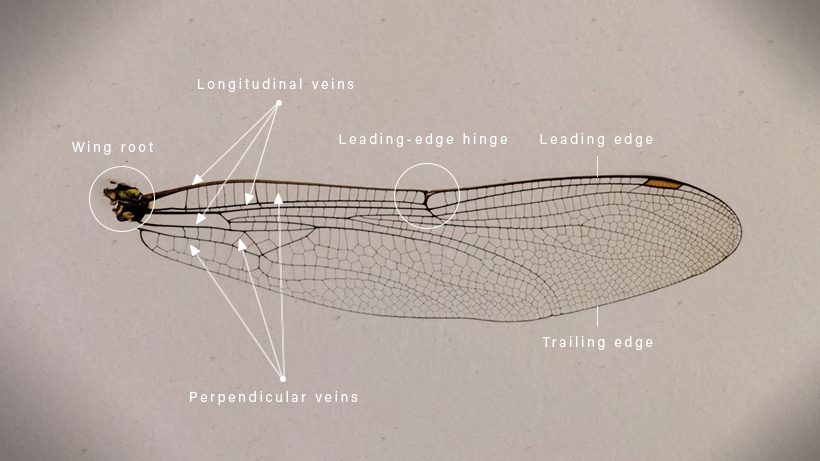 While the vein network stiffens the wings in the direction of the wingspan, it also permits flexibility in the perpendicular direction. This enables the wings to twist, increasing the lift generated during each stroke. Flexibility also reduces the chances of cracks forming from stress fatigue. There are several contributions to this flexibility. There is a hinge-like structure halfway along the wing’s leading edge; and the joints in the vein network are not fixed. The leading-edge hinge and the vein joints are bridged by resilin, which enhances flexibility by both absorbing and releasing kinetic energy.

Dragonfly wings are optimized for gliding as well as flapping. Unlike smoothly shaped aircraft wings and propeller blades, dragonfly wings are corrugated. This causes the formation of low-pressure vortices in the micro-valleys between the corrugations. These vortices increase lift, reduce drag and increase the maximum angle of attack before the wing stalls. Increased mass at the leading edge of the wing (where it begins to curve backwards toward the wing tip) inhibits vibrations from airflow, increasing gliding speed by up to 25 percent. Tiny spikes on the edges of the wings also improve efficiency by stabilizing air flow over the wings and reducing drag.

The secrets hidden in dragonfly wings could prove useful for developing micro-air vehicles for challenging extraterrestrial environments. A vehicle with unfolding wings and with the ability to both ascend and glide would be superior to the Ingenuity Mars helicopter whose rigid rotors must continually spin to remain aloft.

Closer to earth, portions of the resilin protein have been used to build renewable replacements for materials that are stronger than their fossil fuel-based equivalents and which can also be used in bio-medical applications because of their bio-compatibility. The combination of strength, flexibility and bio-based sourcing is an attractive one.

Dr Jonathan Chong is an intellectual property lawyer in Montréal. He has degrees in chemistry and biochemistry. His research career included hydrogen storage materials, bio-based materials and renewable replacements for feedstocks derived from fossil fuels.

—Watercolour of dragonfly by Henrietta Scott—