‘Like a moth to a flame, my paddle board and I are drawn out towards the sun rising'

Seven writers go out to sea

We are looking down at the river rocks flowing fast, almost underfoot. Never mind the rain, this is a wet endeavor whichever way you look at it. Food, fuel and extra cloths are all in dry bags of various colors. They make the paddle boards happy places. And you want to be happy on such craft; unlike kayaks or those powered beasts that sometimes appear on the larger rivers, paddle boards require you to be satisfied with what the current and many gentle strokes can provide. There will be hours upon hours of time to stand, or kneel if the winds are up, and watch for eagles, ospreys and great blue herons honking their way along the channel or squawking their landing call. Time to think; time to laugh, recall stories with your companions. Faster water can yield new experiences to remember on future trips. At night, by a river like the Willamette, a simple fire on river rocks quickly dries the day’s cloths, boils water for a cup and helps create the feeling that comes after a long day out. My daughter and I love such long days. They deepen our respect for the outdoors and for each other. .

Seawater splashed across my eyes as I awoke at the rear of a small boat.

The smell of gasoline combined with the boat’s motion crashing against the waves had locked me into a state of limbo. The roar of the motor engine became white noise lulling me back to sleep, only to wake again and then again from the thuds of the speed boat. It was a three-hour journey to Derawan, a collection of small islands off the eastern coast of Borneo. Each one is unique. One island has a lake that is congested with jellyfish. Another is an island of sand that completely disappears at high tide. I live in the world’s biggest archipelago but rarely venture out from the main islands. So I thought nothing much would happen during my three hours on the boat. I got that wrong. There were moments that people might not encounter in a whole lifetime. Passing through majestic lines across the surface where two seas meet. Dolphins swimming alongside me. Seeing flying fish gliding above the water.

Again, I felt a splash of water on my face and I opened my eyes to find myself at the rear of a small boat.

When traveling, I prefer cruises. Everything is convenient, and I can visit multiple destinations, such as Belize, Turks and Caicos, and Jamaica. Some cruise ships are like mini-cities with thousands of people—some kind, some not—, shows, games, libraries, shops, and buffets. The buffets (however) are overly accessible, and, on every cruise, weight gain is inevitable. To avoid weightiness and to practice self-discipline, I go to the library and I try to go to the gym—which usually has a track wrapping round the ship. I am not a runner. I refer to myself as a turtle. But on one cruise I decided to jog. While jogging around and around on the track, I started gasping for air, realized that I was unfit, and wanted to find a buffet to ease my remorse and joints. But, feeling the breeze from the Atlantic Ocean, hearing the sound of the music and the people, observing the stillness in the endless water, and pacing my steps, all reminded me to breathe. I paused, grounded myself, walked the track, and enjoyed the journey inside my journey. Being surrounded by water can be all-consuming. But the ship and its path can be a journey.

That Hamburg is a maritime centre situated at the mighty Elbe river is well known—but were you aware that Hamburg has more bridges than Venice and Amsterdam together and that the city has canals traversing its districts: beautiful, old canals? Some of these waterways go up to and around the smaller Alster river, which in medieval times was dammed in order to power the mills operating on its banks, thereby creating a great lake in the centre of Hamburg. You could just stand there and look at it, from a great height, but if you really want to discover the city and to collect glimpses of the lives of others that you could not obtain were you to stay put on the land—glimpses of the tremendous real estate, views of the amazing gardens—then go out in a canoe. You can bring your own or pick one up for hire. They are everywhere. And so are the restaurants and the ice cream kiosks. The more slowly you travel, the more time there is for ice cream.

A TALE OF TIDES

Yawning summer mornings beckon Durban’s devout seafarers to their daily Mass. Like a moth to a flame, my paddle board and I are drawn out towards the sun rising over the Indian Ocean, in search of dolphins, whales, peace and perspective. In the distance, surfers mob the early morning swell and paddle-skiers set out in packs to conquer deeper waters in pursuit of fish, and sleepy small-talk.

Even with this activity punctuating my paddle, the ocean is all-consuming, and I am afforded a front row seat to observe Nature as she ticks over a new grand tale each day: a tale of tides, of birds, of fish, and of life. The ocean heaves and sighs as she waltzes in time with the moon. On my board, I am simply a spectator, watching this symphony play itself out in the waters below me and the sky above.

So next time you feel, with Wordsworth,  that ‘the world is too much with you’, venture out onto the ocean and be unburdened by the knowledge that you are after all only a little human in a great, powerful expanse that sways from tomorrow to tomorrow—and everything is going to be all right.

It is early in the morning, the sun is low and a dim light is gently enlightening the horizon. We are on Moorea, a small island ten miles from Tahiti. The air is sparkling and the visibility is affected by that soft haze of summertime dawns. The boat, an old wooden sailing boat, slips the moorings. An hour later, we spot a whale blow not far from us. Then a second, and a third one. The captain brings the boat closer, and silently we enter the water. It is all deep blue, and I look around me, searching for the whales. Nothing, except their distinctive songs. All of a sudden, a giant unclear figure shows thirty meters or so far away, but moving closer. In a few seconds, the whale is only a few meters from me, and I am feeling astonished and charmed by the gentleness of her movements despite her massive size.

The ocean is the origin of all life on Earth. I was in my honeymoon with my wife when we sailed on the blue sea looking for the whales. What will happen to us and to them? How can we preserve and protect them and ourselves?

Enormous vertical limestone cliffs rise from beneath the sea like skyscrapers. This is where any resemblance to my daily, bustling, city lifestyle ended. Our captain steered the yacht past stunning rock formations, majestically dotted around the Ko Phi Phi archipelago. There is something calming and therapeutic about sailing on the clear and vivid turquoise waters in this part of Thailand. The visual beauty is almost a sensory overload, with radiant schools of fish circling the hull and towering limestone cliffs framing the ocean in such dramatic fashion.

Leaving the comfort of our yacht to snorkel in the crystal waters was amazing, as though being lowered into a large aquarium. The striking colours of the coral, the exotic marine life and the total silence were quite hypnotic.

Our journey of discovery through the Phi Phi Islands was incredible but the final destination also did not disappoint. We anchored at Maya Bay in the Andaman Sea. This was the scene of a Hollywood blockbuster movie, The Beach. Maya Bay captured all the postcard clichés in one place: exceptional clear waters, white powdery sand beaches, lush tropical vegetation. We had sailed to an uninhabited paradise. This was a journey not to be forgotten. 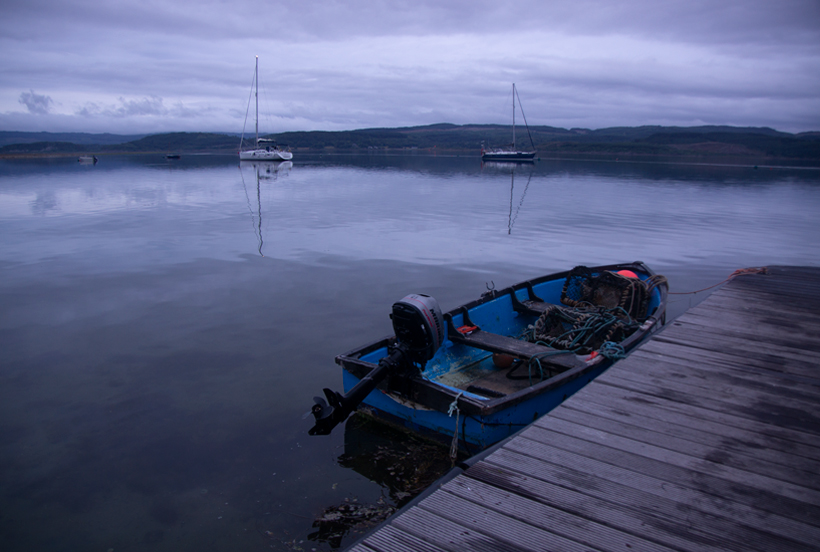