Safeguard Mechanism Your guide to compliance for 201617

This legal update has been developed in conjunction with Ndevr Environmental, which specialises in carbon and energy monitoring, reporting and verification; partnering with clients to achieve positive business and environmental outcomes.

This update is not exhaustive regarding all Safeguard Mechanism requirements. Instead we have covered some of the time critical points and some key concessions businesses will need to consider to mitigate compliance costs from exceeding their baseline into the future.

What you Need to Know and do Now

Right now you need to consider whether your company is likely to be covered by the Safeguard Mechanism, which is the liable company (responsible emitter) and whether a baseline number defined by historic reported NGER data is appropriate for your facility.

Is Your Facility Covered?

The Safeguard Mechanism will apply to companies operating one or more facilities which emit more than 100,000 tonnes of carbon dioxide equivalent (CO2-e) “covered emissions” in a financial year. Covered emissions are all direct (scope 1) emissions covered by the National Greenhouse and Energy Reporting (Methodology Determination) 2008 (subject to exceptions for landfills and electricity generators).

For companies already covered by the National Greenhouse and Energy Reporting Scheme (NGERs), you should review your NGERs reports submitted since 2009/10 to determine whether any one facility has reported scope 1 emissions of 100,000 t CO2-e or more in any financial year. It is not necessary to count the scope 2 emissions (i.e. from grid electricity or steam consumption) included in your report. This review will be a good indicator of whether your facility is likely to exceed the threshold in 2016/17. Additionally, it will be necessary to consider whether your facility will be subject to any expansion or increase in production which may cause the facility to meet the threshold in the future.

If you are not already reporting under NGERs, you are unlikely to be covered by the Safeguard Mechanism, unless your facility has undergone a recent expansion, or you have a new investment or you are a non-constitutional corporation (such as a local council) which operates a large facility. In these scenarios, you should review your facility’s projected emissions to check if the threshold will be exceeded in the future.

Who is the Liable Company?

Once you have determined that your facility emits more than 100,000 t CO2-e, it is necessary to determine which company has “operational control” of the facility and will therefore be responsible for compliance under the Safeguard Mechanism. This will be the company with authority to introduce and implement any or all of the operating policies; health and safety policies and environmental policies. Where there are multiple companies operating at one facility, it is usually necessary to review the contractual arrangements in place at the facility to determine which company has operational control.

Is a ‘Reported’ Baseline Appropriate?

The default position for companies reporting under NGERs is that your facility will be given a ‘reported’ baseline, based on NGERs data for the five year period between 2009/10 and 2013/14 (see below).

To take advantage of a calculated baseline, right now, you need to understand what your project emissions for 2016/17 will be. You can calculate this yourself based on the forecast production and emissions intensity for your facility. This will be your default emissions target. In order to manage your exposure, you should know this target well before July 31, 2016 (the first application deadline), because if you overshoot your baseline, you may need to purchase Australian Carbon Credit Units (ACCUs) for every tonne of emissions ‘overshot’.

If you satisfy the reported baseline criteria and believe that your projected emissions into the foreseeable future will remain below your highest reported scope 1 emissions value from 2009/10 to 2013/2014, then no further action regarding baselines is likely to be required. You should not  trigger the historic baseline and will not be required to purchase ACCUs.

Optional Reported Baseline for Some Facilities

If you are in this position and don’t follow options 1 or 2 above, the Regulator will give you a default baseline number of 100,000.

If you expect your facility’s baseline emissions to exceed your reported baseline, then it is recommended that you consider applying for a ‘new’ baseline under the calculated baseline criteria. This is your ‘free-kick’!

Because these application dates are not straight forward, we have provided a practical case study further below to illustrate when applications need to be submitted. You can also see Ndevr Environmental’s recent article on key dates for calculated baseline applications here. It is important to understand forecast emissions early to make an informed decision about when to submit your application, accompanied by an audit report.

You have operational control of Facility ‘X’. Based on the past emissions for Facility ‘X’ in Figure 1 below, the reported baseline will be 300,000 t CO2-e. 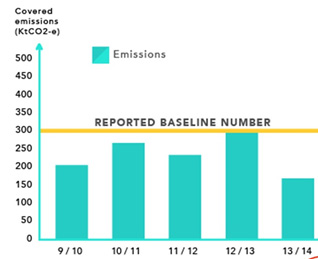 Based on your projected  future emissions in Table 1 below, you think you will exceed this (reported) baseline as soon as the Safeguard Mechanism starts.

What can you do?

For Facility ‘X’, assuming it can source ACCUs at $12.25 each over the next three years (equal to the weighted average price paid by the Government at ERF Auction 2), the direct cost to business over the three years is $2,450,000.

In this instance Facility ‘X’ should look to apply for an initial calculated baseline.

Under Figure 2, Facility ‘X’ should establish its baseline number based on forecast production levels from 2016/17, which will present the highest covered emissions during the three year calculated baseline determination period. 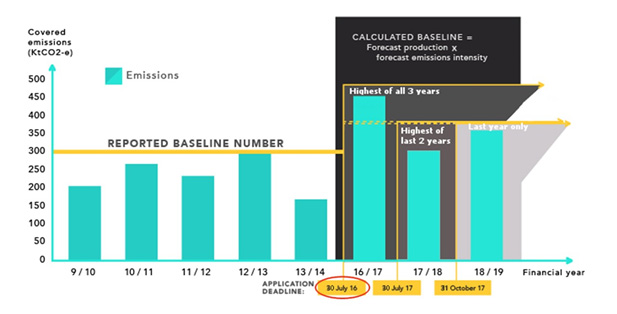 Using the forecast production and emissions intensity from Table 1, the calculated baseline would be as follows:

Importantly, as per Figure 2, because Facility ‘X’ wants to establish its baseline number on forecast emissions from the 2016/17 year, which will present the highest covered emissions during the three year calculated baseline determination period, it must submit its application and audit report by July 30, 2016.

If the application is submitted after July 30, 2016 and by July 30, 2017, then the baseline number for the three year period will be based on only the last two years of forecast emissions, which in this case  is 350,000 tCO2-e (in 2018/19). For Facility ‘X’, because projected emissions in year 3 of the baseline determination period are higher than in year 2, the baseline number will be the same if the application is submitted after July 30, 2017 but before and by the final deadline of October 31, 2017 (and therefore based on the final year only).

To avoid significant costs in this scenario, it is highly beneficial for Facility ‘X’s responsible emitter to submit its initial baseline application and accompanying audit by 30 July 2016.

Following the end of the compliance year, you will be required to report as usual under NGERs, by October 31, 2017.

if it becomes apparent that your facility exceeded its baseline in 2016/17, there are various flexible mechanisms you can use to manage compliance as follows:

Finally, if it becomes apparent that your facility has exceeded its baseline and you have not been able to take advantage of the above flexible mechanisms, you may surrender ACCUs to cover your emissions excess by February 28, 2018.

From March 1, 2018, if your facility exceeded its baseline in 2016/17, and you have not surrendered ACCUs to offset the exceedence, the Regulator may seek to impose a civil penalty on you. The maximum penalty is the lesser of 100 penalty points per day (currently $18,000 per day), with a maximum of 10,000 penalty points in total $1.8 million.

While this update has focused on Safeguard Mechanism compliance in the immediate future, important differences will apply to new facilities post 2020, which will have their baseline set using emissions intensity industry benchmarks. The Department of Environment has recently issued draft guidelines on how these emissions intensity benchmarks will be established. The draft guidelines are open for public consultation with submissions due by 5.00 pm AEST on May 6, 2016.