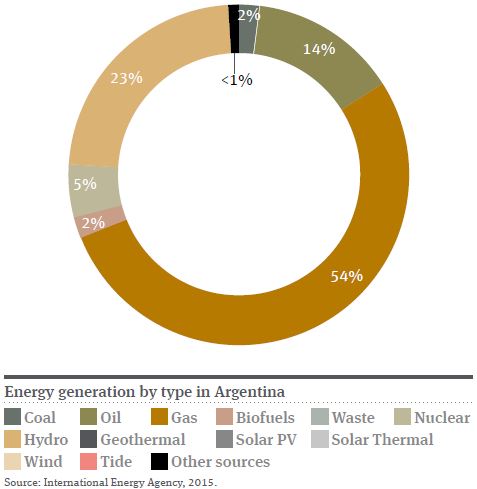 Argentina is the third largest power market in Latin America. The Argentinian power landscape is still dominated by fossil fuels, which represent 87 per cent of the total energy mix. Until 2010 Argentina was a power exporting country, however, increased consumption combined with a steady decline in developing new power projects and the decline in the extraction of natural gas forced Argentina to import power (and natural gas for thermal power plants) from neighbouring countries. Argentina is facing a significant power deficit which has triggered various ambitious government initiatives to install additional capacity at record speeds.

Amongst the various initiatives to increase power generation the Argentinian government has launched the RenovAr Programme to develop Argentina’s renewable energy sector. RenovAr started its first round with an auction to add 1,000MW of renewable energy to the grid (600MW of wind, 300MW of solar, 65MW of biomass, 20MW from small dams and 15MW from biogas). The projects will need to be built in no more than 24 months and investment between US$1.5 and US$2 billion is expected only for the first round.

The round of applicants for the first tender showed an impressive number of proposals, 123 projects in total with over 75 companies bidding for projects. Over 6,000MW in proposals were received with this tender, making the tender six times oversubscribed.

The awarded PPAs will have a duration of 20 years and will be denominated in Argentinian Pesos. The PPA issued with the tender process addresses convertibility issues and the guarantees in case of events that prohibit free currency conversion.

RenovAr’s first round benefits from a World Bank guarantee for PPA termination payment (see diagram 1 below) sitting behind the newly created Renewable Energy Trust Fund (FODER) and the State, more details on the fund below. The fund also provides an PPA energy payment guarantee (see diagram 2 below) backing the payment obligations of CAMMESA (the national utility company) as the offtaker under the power purchase agreements (PPAs) to be awarded in the first tender.

In October 2015, Argentina issued Law No. 27,191 (an amendment to Law No. 26,190) which established the national regime for the promotion of renewable sources of energy for power generation. New projects will benefit from an anticipated VAT return for capital goods purchased, accelerated depreciation of applicable assets, tax certificates for projects with national components and extension to ten years of the period for income tax loss carry-forwards.

Law No. 27,191 established the basis for the creation of FODER, which will be mainly financed by the National Treasure, the fund will provide a subsidy with a feed-in tariff for facilities of up to 30MW of US$0.11/kWh for solar projects and US$0.005/kWh for wind, geothermal, biomass, biogas and hydro projects. The fund will also provide long term project loans, loan guarantees, interest rate subsidies and equity contributions. As previously mentioned, the fund will also serve as a payment guarantee for all tendered PPAs and termination payments.

In addition, the new renewables law establishes that the government will channel at least 50 per cent of savings from offset fossil fuel purchases to the fund, along with charges on power consumption, interests and profits from financed projects.

Argentina is ripe for exploitation of wind, solar and biomass with exceptional resources in relation to wind energy. Global experience indicates that with average winds of 5m/s or higher it is feasible to deliver good returns in wind power generation. About 70 per cent of Argentina’s territory enjoys winds with an average speed of 6m/s or more, while in areas of Patagonia they can exceed 9m/s. Argentina has the foundation to become a regional leader in the use of this technology. According to Wind Energy Market Intelligence, Argentina had 22 operational wind farms spread across the country by September 2016. The total wind generation capacity installed in Argentina is only 279MW. However, out of the 6,000MW in proposals received during the first RenovAr tender, wind projects totalled an impressive amount of 3,468MW.

Argentina also has strong solar resources, especially in the north western region. This region was the proposed location for over 1,800MW of proposals during the first RenovAr tender.

Biomass and waste-to-energy in Argentina have long been overlooked. Argentina’s varied environmental ecosystems fuel the growth of diverse crops (including soy), which creates potential for biomass energy. Studies have shown much of the six million tonnes annual forestry waste in Argentina could be used to generate electricity. In 2013, the government created the ‘PROBIOMASA’ program, which aims to boost production, management and sustainable use of biomass for energy purposes. The PROBIOMASA program has targeted the generation of 400 thermal MW by 2016 and seeks to eventually convert 12 million metric tons of agriculture-related biomass annually. The PROBIOMASA program will need approximately US$750 million in funding.

Since the default of the Argentinian government in 2001 in relation to sovereign bonds, Argentina has found it difficult to attract international investment. However, China has emerged as a willing financer with the China Development Bank as an active player in renewable energy projects in Argentina. Whilst Chinese banks can offer competitive interest rates and willingness to finance projects in Argentina, the money typically also comes with conditions, such as the use of Chinese equipment and contractors.

According to the Argentine Chamber of Renewable Energy, one of the principal obstacles for profitable exploitation of renewable energy sources remains assured power prices over a suitable duration of the project and effective enforcement of tariffs awarded under the PPAs. Power prices have been significantly adjusted by the current administration of President Mauricio Macri in an effort to attract and offer comfort to foreign investors. Macri’s administration’s effort is complemented with the creation of FODER which provides an effective guarantee for the enforcement of tariffs awarded under the PPAs and more importantly, PPA termination payments.

The country’s relatively high cost of debt, and low availability of local and foreign capital, make it difficult for project developers to secure financing. However, results on RenovAr’s first tender were a pleasant surprise for many sceptical observers. According to many commentators, they expect the government to seize this momentum by increasing the offered MWs under the first tender or accelerate the second tender. However, future tenders under the RenovAr program will receive active participation only if the first round of projects progress satisfactorily and the tariffs obtain remain competitive for financiers.

Macri’s administration has sought to set out a clear path to change foreign investors’ views on Argentina. The government has initiated negotiations to improve the country’s credit rating. S&P was one of the first agencies to react to Macri’s policies by raising the country’s rating from CCC+ to B-. In real terms Argentina is now (for the first time in over a decade) out of default and has lifted the currency control regime implemented by the previous administration. If the current policies are maintained and the government assures long term regulatory consistency, Argentina’s renewable energy sector could become a top destination for foreign investment.