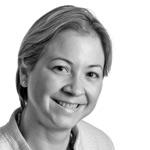 Sandrine Sauvel is a capital markets lawyer based in London. Sandrine specialises in structured finance, both securitisations and structured products, in the UK and throughout Europe, acting for arrangers, originators, trustees, rating agencies and monoline guarantors.

Sandrine joined the London practice as a partner in 2006 having previously worked for another leading law firm.

Major transactions include advising Crédit Lyonnais on the structuring of a €620 million aircraft lease securitisation for Air France; advising Goldman Sachs on the issue of €1,225 million secured notes by Toll Road Funding for the refinancing of a secured loan made to Italian toll road operator Autostrade; advising Allianz Risk Transfer as financial guarantor in the issue of €175 million secured notes by Prime Edge Capital; advising Angel Trains on its £480 million West Coast trains lease receivables securitisation; advising the borrower in a whole business securitisation in the healthcare industry; advising Deutsche Trustee Company Limited as note and security trustee following the default of the Welcome Break whole business securitisation; the establishment of a multi-jurisdictional multi-asset commercial paper conduit for a German corporate; advising Greenwich Natwest in PFI bond issue for the construction of the Bishop Auckland hospital; advising an arranger in a £343 million CMBS funded through a commercial paper conduit.

Sandrine is qualified as a solicitor in England and Wales and is admitted to the Paris Bar and the New York Bar. She is fluent in French and English.