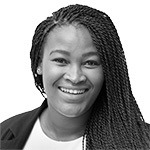 Busisiwe is corporate and commercial lawyer based in Johannesburg and part of the dispute resolution and regulatory practice as well as the investigations, business ethics and anti-corruption practice.

Her focus is on all areas of corporate and commercial law, public procurement and administrative law, class actions, international arbitrations, white collar crime and corporate investigations.

She works with various international and local clients (including consultants, banks and consortiums in private public partnerships) in their work with organs of state and advices them regularly on the regulatory framework governing public procurement.  She has worked extensively on litigious matters, including the largest class action in South Africa to date acting on behalf of one of the mining companies. She is involved in a number of administrative law reviews and several high profile litigious matters relating to allegations of corruption and State Capture.  She is part of a multi-jurisdictional team advising an international management consulting firm in regard to its internal investigation concerning its work for South African state-owned enterprises, and incidental matters. She also worked as part of a cross-border team involved in an international arbitration against a Foreign African State following the breach of an agreement entered into by that State with a private company.

Busisiwe spent two valuable years at the Supreme Court of Appeal (SCA) as a Law Researcher (formerly known as a Judges' Clerk).  In this role she was required to do extensive research in order to assist the judges in their writing of judgments on matters of a varied nature and complexity.

LLB from the University of Pretoria, 2012

South Africa: Let’s talk BEE | Part 2 | The role of SOEs as a catalyst for a transformative South Africa and how to engage with them from a BEE perspective