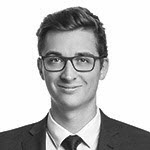 Mr. Bourget-Rousseau obtained his Bachelor of Laws from the University of Montreal. As part of this program, he completed one semester at the University of Kent, in the United Kingdom. He also earned a Master of Laws from McGill University, during which he acquired in-depth knowledge of labour law, human rights and freedoms and public international law.