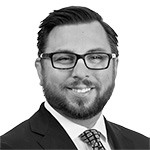 Patrick Levesque practises in our litigation group. He represents clients in both of Canada's official languages in a broad range of civil and administrative matters. His practice includes commercial disputes, contractual disputes, insurance matters, and civil liability issues. Mr. Levesque has appeared before the Superior Court of Justice and the Federal Court of Canada.

Mr. Levesque is a part-time professor at La Cité collégiale where he teaches torts and contract law in the paralegal and law clerk program. He also volunteers as duty counsel for Pro Bono Law Ontario.

On October 25, the Government of Canada tabled significant amendments to the Official Languages (Communications with and Services to the Public) Regulations (Regulations). December 2018