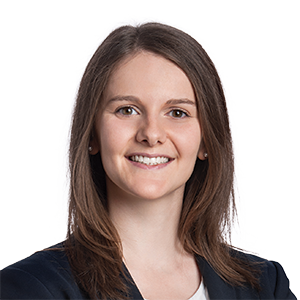 Virginie Blanchette-Séguin is a Montreal-based litigation lawyer. She takes an interest in all aspects of civil and commercial litigation, with a particular emphasis on appeals.

Ms. Blanchette-Séguin joined the firm after having clerked for Justice Clément Gascon at the Supreme Court of Canada, and for Justice Marc Nadon at the Federal Court of Appeal.

During her legal studies, she articled at the United Nations Office of Legal Affairs and at the International Law Commission. She was also a member of the winning team of the 2013 edition of the Charles-Rousseau Moot Court Competition in International Law, where she distinguished herself as one of the best litigants.