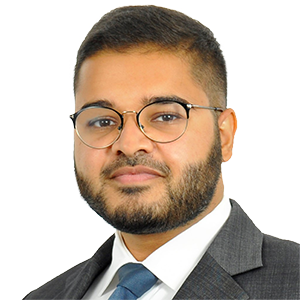 Ahmed is a dispute resolution lawyer based in our Dubai office.

His primary focus is on dispute resolution through international arbitration, and he has extensive experience in the infrastructure sector. Ahmed has acted for employers, contractors, subcontractors and operators on a wide range of contentious and advisory matters involving numerous landmark projects in the region. He also has experience in general commercial dispute resolution, and has acted for parties involved in England and Wales High Court litigation, mediation, conciliation and expert determination proceedings.

Ahmed has been based in the Middle East, cumulatively, for 10 years, and has lived in both the UAE and the Kingdom of Saudi Arabia. Prior to working in the region, he advised on a variety of disputes in London. In addition to the United Kingdom, United Arab Emirates and Saudi Arabia, Ahmed has also lived in both Indonesia and Malaysia.