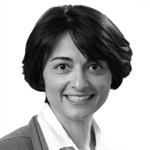 Poupak is a corporate lawyer with an international background.  She is currently based in Washington, DC, but has previously practiced in Canada and France. She advises companies involved in mining, oil and gas and agriculture on corporate and regulatory matters, the establishment of joint ventures, partnerships, mining conventions, PSAs, as well as sale and financing of assets.

Over the past few years, her practice has been focused on French-speaking sub-Saharan Africa and in particular Democratic Republic of Congo, Guinea, Mali, Ivory Coast, Senegal, Togo, Republic of Congo, Burkina Faso and Guinea Bissau. She has been recognized by Chambers Global as a DRC Foreign Expert for general business law and corporate and M&A work.

Poupak qualified in 1993, following which she obtained a Master's Degree in Law, from McGill University. She is fluent in English and French and speaks Farsi.