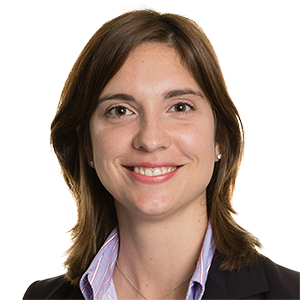 Christina is a Director and head of our Mining practice. She focuses on commercial matters in the team, and works on transactions in a variety of industries in addition to mining, including in the telecommunications, life sciences and banking sectors.

Since her admission in 2009, she has worked on market leading deals, including the re-structuring of Rio Tinto and BHP Billiton's shareholdings in and the empowerment transaction relating to Richards Bay Minerals, the epowerment transactions relating to Exxaro Resources, the acquisition by Sandvik of its South African rock processing business, as well as various global acquisitions by Sandvik. Christina assisted World Bank-affiliated International Finance Corporation on a number of investments into Africa, including in respect of Advtech Limited and Ascendis Healthcare. She advised Neotel during their sale to Liquid Telecommunications, and continues to be the legal advisor to the World Platinum Investment Council.

In addition, Christina works in the renewable energy space, assisting on the corporate structures for idependent power producers bidding in the South African government's various rounds of requests for proposals.