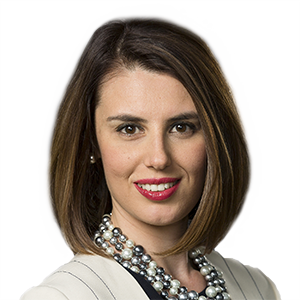 Maria Panos is a litigation and dispute resolution lawyer based in Sydney.

In 2017 she was awarded Senior Associate of the Year in the Women in Law Awards on account of her extensive government litigation experience, in particular her work for the NSW Police Force on the Lindt Cafe Siege Inquest, Royal Commimssion into Institutional Responses to Child Sexual Abuse and Cunneen Special Commission of Inquiry.

Maria has extensive experience acting for state and commonwealth government departments and has been involved in a wide range of matters for commercial clients including liquidators, banks, and resources clients.

Maria has recently acted in a number of high profile inquiries. She acted for the NSW Police Force in the Inquest into the deaths arising from the Lindt Café Siege - the largest coronial inquest in Australian history. In 2013 she acted for the State of NSW at the Royal Commission into Institutional Responses to Child Sexual Abuse in respect of its Case Study on the Bethcar Children's Home. She has also acted for the NSW Police Force in a wide range of matters including the Cunneen Special Commission of Inquiry into matters relating to the police investigation of certain child sexual abuse allegations in the Catholic Diocese of Maitland Newcastle and she appeared for the Commissioner of Police in the Police Integrity Commission in Operation Protea. Maria has additionally acted for the State of NSW a number of claims by both former police officers alleging negligence against the NSW Police Force and individuals who allege that they have been unlawfully arrested, maliciously prosecuted, or defamed in their dealings with the NSW Police Force.

Maria has also had commercial experience and was involved in representing the liquidators of Lehman Brothers Australia in an investors' class action commenced against the company.