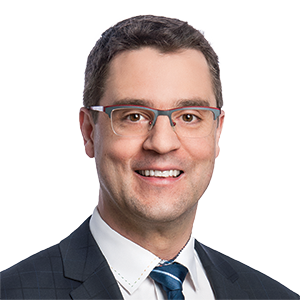 Mathieu Deschamps deals with all aspects of corporate law and business law, with a focus on mergers and acquisitions and setting up complex structures in connection with equity and debt financings, involving both publicly traded and privately held companies. He is frequently involved in multi-jurisdictional transactions involving the acquisition, merger or financing of businesses in Canada, the United States and abroad in various sectors of the economy, including in the transportation, food and pharmaceutical, financial, insurance, securities advisory and trading, entertainment and oil and gas and renewable energy industries. He is also routinely involved in the negotiation of shareholders' agreements, partnership agreements and various commercial contracts for large corporations, institutional investors, as well as SMEs and start-up companies.

In 2020, Mr. Deschamps had the immense honour of being recognized as a Leading Lawyer Under 40 in Canada by Lexpert.

In addition to his law degree, Mr. Deschamps obtained a bachelor of commerce and acquired business experience by working as a market analyst for a mining company during his law studies.

He is currently the leader of the private M&A team for the Montreal office.

Clients for whom Mr. Deschamps has acted recently include:

"An overview of an M&A Deal," M&A academy series webinar

The rights of trans youth in Quebec