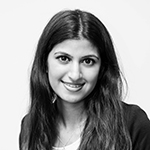 Kiasha is a litigation and dispute resolution lawyer based  in Johannesburg.

She is part of the aviation team which is focused on South Africa, southern African and international aviation insurance markets, representing local and foreign aviation insurers and reinsurers and their insureds.  Kiasha  manages the South African team that acts as a low cost hub as part of NRF's global project. The SA team provides support to NRF LLP in respect of UK aviation litigation and alternative dispute resolution including delay claims made in terms of European Union Regulation EC No. 261/2004.

She commenced her articles with us in 2015 and was appointed as an associate designate in our Litigation Insurance team in January 2017.

In addition to experience in aviation related matters, Kiasha also has experience in general  insurance and related litigation and dispute resolution including home and motor insurance, construction and engineering disputes, disputes in connection with performance guarantees in the construction industry, and white collar crime (with emphasis on fraud and corruption).

Flight delays: What compensation can you claim?