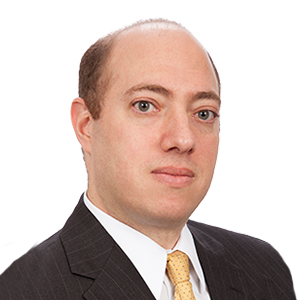 Daniel Leventhal is the Head of IP Disputes, United States. His practice focuses on patent litigation and counseling, with a focus on telecommunications, electronics and Internet. He has deep technological understanding in numerous areas, including wireless and wired telecommunications, Internet and e-commerce software and services, microprocessors, display hardware, and medical devices.

Daniel believes the key to effective advocacy in patent litigation is to quickly and thoroughly learn and understand the technology-at-issue and use that understanding to guide strategy throughout the case. He has experience in day-to-day management of patent litigation, including leading the development of strategic positions, coordinating document and information collection, taking and defending depositions, working with experts, and drafting and arguing motions and claim construction. Daniel has handled cases in Federal courts across the country including the Northern and Central Districts of California, the Southern, Western, Northern and Eastern Districts of Texas, the Western District of Wisconsin, the Western District of Washington, the Eastern District of Virginia and the District of Delaware, as well as the International Trade Commission (ITC).

Daniel is also licensed to practice before the US Patent and Trademark Office (USPTO). He has experience in ex parte prosecution, as well as post-grant proceedings, including covered business method reviews(CBMs), inter partes review (IPRs), ex parte reexamination and inter partes reexamination.