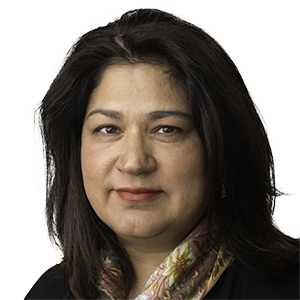 Farmida Bi is our EMEA Chair and is based in London. She has more than 20 years of experience in capital markets and Islamic finance transactions, advising on English and New York law. She is also our European Head of Islamic Finance.

In addition to her role as Chair, Farmida continues her client work, acting on high-profile and award-winning transactions, such as: advising the International Committee of the Red Cross on the world's first Humanitarian Impact Bond, an initiative that drew investment from the private sector to design, build and operate rehabilitation centres in Africa; advising Lloyds Bank in a Supreme Court case confirming it had the right to redeem £3.3bn of enhanced capital notes, issued at the height of the banking crisis; and the Government of Pakistan on its issuance of more than US$7bn of bonds and Sukuk in the past four years.

Farmida joined the firm as a partner in 2008. She was previously a partner at another large international firm and has worked in the London offices of other leading international US and UK-based firms.

Farmida is named as a 'leading individual' for Islamic finance and for debt capital markets in Legal 500 UK, 2019. She is listed in The Lawyer's Hot 100 for 2019; has been awarded 'Best in Banking and Finance' twice at the European Women in Business Law Awards, and was nominated again in 2018; and was named one of the five most powerful Muslim women in the UK in The Times' inaugural Muslim Women Power List.

She is a graduate of Downing College, Cambridge and qualified as a solicitor in 1992, and as a New York attorney in 1999.