On 13 February 2020, the Ethiopian parliament ratified the 1958 New York Convention on the Recognition and Enforcement of Foreign Arbitral Awards (the NY Convention). The NY Convention is an international treaty governing the recognition and enforcement of arbitral awards. Signatories commit themselves to recognising and enforcing arbitral awards made in participating countries, subject to very limited exceptions. Ethiopia is the 162nd state to sign up to the NY Convention and the 33rd state in Africa. The most recent African joiner before Ethiopia was Angola (2017). For Ethiopia, it is an important step in continuing the country’s economic reforms started under the new Prime Minister, Abiy Ahmed, who sees making Ethiopia more appealing to international investors as one of his top priorities. 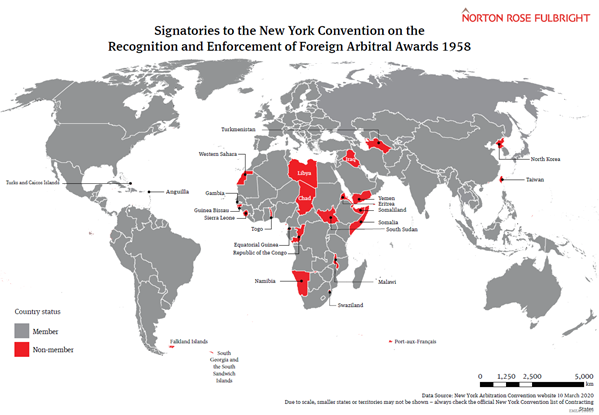 The impact of ratifying the NY Convention on arbitration in Ethiopia

The ratification of the NY Convention coincides with other reforms in Ethiopian dispute resolution. The government is currently developing new domestic arbitration legislation, which is expected to be based on the United Nations Commission on International Trade Law (UNCITRAL) Model Law on Commercial Arbitration. Together with the NY Convention and a number of economic reforms in the pipeline, these developments are aimed at attracting international investment to Ethiopia.

Under the existing arbitration regime in Ethiopia, the grounds for enforcing foreign arbitral awards are found in the Civil Procedure Code (CPC). The CPC allows enforcement of foreign arbitral awards only under a principle of reciprocity. The Supreme Court of Ethiopia has interpreted the principle of reciprocity as requiring a treaty of judicial assistance between the two states. At a time of writing, the only judicial assistance treaty entered into by Ethiopia is with China.

In the light of the historic difficulties with the enforcement of arbitral awards in Ethiopia, the ratification of the NY Convention offers investors in the country welcome improvements to the enforcement regime for future arbitral awards. The Ethiopian courts will now have to recognise foreign arbitral awards made by the other participating states without questioning the merits of the award. Whilst awards are still subject to Article V of the NY Convention, which allows for setting aside of an award, this is only in limited circumstances. The approach with which the Ethiopian courts apply Article V will be one of the key factors in shaping the future of arbitration in Ethiopia.

The reforms in the legal sector come at a time when the country is undergoing significant economic transformation, driven by the ambitious Homegrown Economic Reform Plan (the Reform Plan) developed by the government. The Reform Plan aims to help Ethiopia transition from a public to a private sector-led economy and increase the inflow of foreign investment. These ambitions are fuelled by financial support from the International Monetary Fund (the IMF), which in December 2019 approved an almost US$ 3 billion three-year financing package to be provided to Ethiopia under the IMF’s Extended Credit Facility and Extended Fund Facility. According to the IMF’s website, “as well as helping to address the foreign exchange shortage, the [IMF] program will also aim to reduce debt vulnerabilities.” In this context, it becomes clear that ratifying the NY Convention has its part in the wider economic reform. To what extent can joining the NY Convention actually boost economic growth in the signatory state?

The NY Convention is widely regarded as a beneficial instrument to boost economic growth and international investment. Myburgh and Paniagua (2016) examined foreign direct investment inflows before and after a country joins the NY Convention1 and found that ratification increased foreign investment by around 10% in the four years and around 11% in the eight years after joining. Although this is a helpful indicator of the beneficial impact of the NY Convention on the country’s economy, it must be remembered that measuring economic growth is not straightforward. Nonetheless, access to a reliable dispute resolution mechanism with good prospects of enforcement of foreign arbitral awards encourages international investors. In emerging economies investors are often concerned that despite being successful in litigation or arbitration they will not be able to enforce their award.

The author would like to thank Maja Mazur, Trainee Solicitor, for her assistance with this blog.