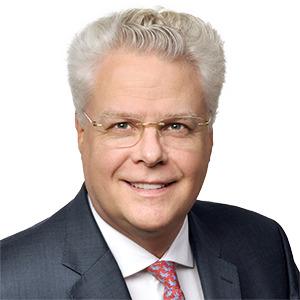 Jochen W. Mann, LL.M. is a lawyer in the financial institutions sector in our Frankfurt office.

In addition, he advises non-financial enterprises (e. g. energy companies) on regulatory issues in connection with MiFID II and MAR. Besides his regulatory practice, Jochen has extensive experience in corporate finance and M&A, as well as in the defense against prospectus liability claims.

He was admitted to the bar in 1996 and has since worked for renowned international corporate law firms in Frankfurt, London, Brussels, and Paris. Thereafter, he was General Counsel and Global Head of Legal & Compliance of a private finance group for several years. Immediately before joining us, he worked with a German corporate law firm and in the structured securities group of a leading German bank.

Jochen studied law and economics in Frankfurt am Main and completed his legal clerkship in Frankfurt and Santa Monica, as well as at the German University of Administrative Sciences in Speyer. In 1995, he earned the degree Master of Laws (LL.M.) from the University of California at Berkeley School of Law.

He is a native German speaker and speaks fluent English.