The Dubai International Financial Centre (the "DIFC"), one of the leading international financial hubs in the Middle East, Africa and South Asia (the "MEASA") region, has recently announced the enactment of the new DIFC Insolvency Law, Law No. 1 of 2019 (the "New DIFC Insolvency Law"), which became effective in June 2019. The introduction of the New DIFC Insolvency Law, comes after the financial collapse of Abraaj Group, which was recently fined a record US$315 million by the DIFC's financial regulator, the Dubai Financial Services Authority, after allegations of fraud and mismanagement. Importantly, the New DIFC Insolvency Law which will repeal and replace the Insolvency Law of 2009 and was the subject of substantial research and global benchmarking introduces a completely new rehabilitation provision for distressed companies in the DIFC in addition to the previously existing procedures such as company voluntary arrangements, receiverships and liquidations. In addition, the New DIFC Insolvency Law's incorporation of the UNCITRAL Model Law on Cross-Border Insolvency is hoped to facilitate a more efficient and effective restructuring regime, allowing the DIFC to play a more substantial role in cross-border insolvencies in the future.

The New DIFC Insolvency Law applies only to entities registered and operating within the DIFC. The DIFC was established in 2004 and is an independent jurisdiction separate from the Emirate of Dubai and the federal law of the United Arab Emirates with its own civil and commercial laws which are written in English and actually default to English law in the event of an ambiguity. The DIFC also has its own courts, with judges taken from leading common law jurisdictions including England, Singapore, and Hong Kong. The DIFC houses a large number of financial institutions, including wealth funds and private investors, and it also hosts multinationals, retail outlets, cafés, restaurants, residential space, public green spaces, hotels, and art galleries. As of June 2019, the DIFC had over 2289 active registered companies, including 671 financial firms and the size of its workforce stood at more than 24,000 professionals.1 The financial services firms that joined in 2019 include Maybank Islamic Berhad from Malaysia, Cantor Fitzgerald from the United States, Atlas Wealth Management from Australia, and Mauritius Commercial Bank.2 Certain other non-financial firms have also recently joined the DIFC including Guidepoint MEA, Medtronic Finance Hungary Kft., and Network International.3 Moreover, in September 2019, it was further announced that the DIFC had risen up the ranks of the Global Financial Centres Index (the "GFCI") to the number eight position, representing the DIFC's highest ever ranking.

Given its rapid growth as a financial centre, it is unsurprising that the DIFC needed to update its existing insolvency regime in order to keep up with other globally significant jurisdictions in the international insolvency arena. With the goal of promoting the rehabilitation of viable businesses that are part of the DIFC while addressing the continuing needs of the various stakeholders involved, the DIFC made several key changes as part of its enactment of the New DIFC Insolvency Law including: (1) the introduction of a debtor in possession procedure known as rehabilitation; (2) the introduction of a procedure that allows the management of a company to be replaced by a court-appointed administrator when there has been mismanagement of or misconduct by the company or management; (3) enhancing and modernizing existing rules and procedures; and (4) the incorporation of the UNCITRAL Model Law on Cross-Border Insolvency.

Part 3 of the New DIFC Insolvency Law introduces a new concept referred to as "rehabilitation," which mirrors the debtor in possession regime of chapter 11 in the US. A company is eligible for "rehabilitation" where it is or is likely to become unable to pay its debts and there is a reasonable likelihood of a successful rehabilitation plan being reached between the company, its creditors, and shareholders. To initiate a rehabilitation proceeding, the board of the company notifies the court in writing that they intend to make a proposal to the company's creditors of a rehabilitation plan (the "Rehabilitation Plan Notification") and upon such notice the court will convene and automatically initiate a 120 day moratorium period, which applies to all creditors. In addition to this moratorium period, any contractual provision allowing termination based upon insolvency is deemed ineffective unless the company agrees to termination, the court approves such termination, or where any sums due after the commencement of the moratorium period remain unpaid for a period of more than twenty (20) days where the company has agreed to pay such amounts.

If at the Post Plan Hearing the court does not sanction the Rehabilitation Plan, the court is required to immediately proceed to take steps to wind up the company.

Change No. 2: Introduction of court-appointed administrators

Part 4 of the New DIFC Insolvency Law allows for the appointment of a court-appointed administrator, who like a Rehabilitation Nominee, must be a registered insolvency practitioner. First, as noted above, one or more creditors may move for the appointment of an administrator where an application for Rehabilitation has been made and there is evidence of mismanagement or misconduct by the company or management. Upon appointment, the administrator shall manage the affairs, business, and property of the company and can seek approval of a Rehabilitation Plan under Part 3 of the New DIFC Insolvency Law. An administrator can likewise be appointed for the purpose of seeking approval of a Voluntary Arrangement under Part 2 of the New DIFC Insolvency Law, seeking approval of a scheme of arrangement under the Companies Law, or investigating fraud or wrong doing by the company and/or its management. The administrator possesses many rights including the general power to remove any director of the company and appoint another director and can also call any meeting of the shareholders or creditors of the company. Upon discharge, the administrator is also entitled to compensation for his services as well as reimbursement of any properly incurred expenses, both of which are to be given priority over other unsecured debts of the company.

Part 6 of the New DIFC Insolvency Law further enhances the rules on voluntary and compulsory winding up and includes more detail with regard to "wrongful trading" in addition to a new section called "misconduct in course of winding up." As to both "wrongful trading" and "misconduct in course of winding up," section 115 entitled "Remedy" applies and gives those aggrieved the right to file an application with the court requesting that these wrongdoers repay, restore or account for the money or other property of the Company which they believe has been misapplied or retained. Additionally, Part 11 of the New DIFC Insolvency Law includes some additional provisions which modernize existing procedures by introducing the use of websites in section 140 and remote attendance at meetings in section 139 for purposes of bringing the New DIFC Insolvency Law up to speed with the latest technologies of today's business world.

Change No. 4: Incorporation of the UNCITRAL Model Law on Cross-Border Insolvency

Following recent legislative changes by the UAE and Saudi Arabia to its insolvency procedures, the New DIFC Insolvency Law represents yet another significant advance in insolvency legislation in the Middle East and should allow the DIFC to better position itself as player in cross-border restructurings in the future. The New DIFC Insolvency Law may also serve to raise the DIFC's attractiveness as an investment location as there will now be a predictable, orderly process in place to aid companies who may find themselves in financial distress. As with any new law, success will depend on its frequency of use and effectiveness in practice, however, based upon the DIFC's established court system supported by professionals that are skilled in business rescues, the New DIFC Insolvency Law should achieve its intended purpose of promoting a modern and efficient bankruptcy restructuring regime for the DIFC.

Laura Smith is an associate in our Dallas office in the firm's financial restructuring and insolvency group. 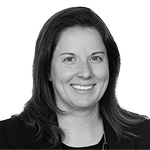