Global law firm Norton Rose Fulbright is pleased to announce Raymond Bachand’s appointment as an Officer of the Order of Canada. He was inducted into the Order by the Governor General of Canada on December 28, 2019, for his contribution to business and politics, and for his ongoing commitment to public governance in several sectors.

As strategic advisor in our Montreal office since 2014, Mr. Bachand leverages his experience as a senior corporate executive by facilitating our clients’ business relationships and offering advice on development, acquisitions and strategic alliances.

A Liberal MP in the Quebec National Assembly from 2005 to 2012, he served as Quebec’s minister of finance, minister of economic development, innovation and export trade and minister of tourism.

During his time in politics, Mr. Bachand contributed substantially to the international visibility and reputation of Quebec and Canada by implementing provincial strategies for research and innovation, aerospace, environment and clean tech. He also participated in the NAFTA renegotiations as Quebec’s chief negotiator, until the signing of the agreement on November 30, 2018.

Raymond Bachand is the latest member of our firm to receive this distinctive award.

The Order of Canada, established in 1967, recognizes a lifetime of outstanding achievement, exceptional dedication to the community or extraordinary service to the nation. More than 7,000 people from different walks of life have been appointed to the Order.

Raymond Bachand will be invited to receive his honour at the next official ceremony, the date of which has not been announced. 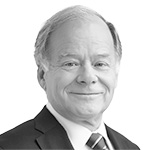